An Encounter with Euan Uglow


Tai-Shan Schierenberg studied painting with Euan Uglow
at the Slade School in London. 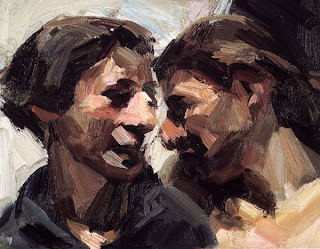 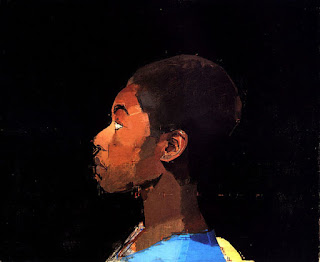 I had been doing the usual: chucking on the paint, wasting prodigious amounts of energy and materials. Sometimes, something would appear in this undisciplined mess, full of vitality and beauty. However it all smacked of monkeys and typewriters, and my understanding of the way painting worked was purely instinctual.

Then, one day in my last term, Euan strolled by and told me that I didn't know what I was doing. Now usually this would have led to a fair bit of antagonism.

But on this day, like a good Zen master dealing with a stupid and recalcitrant student, Euan timed his approach perfectly, and cutting the crap, just asked me which color I thought was the most prominent when I looked at the posing model, and how light or dark I thought it was. Then, after I had mixed and applied that to the canvas, we moved to the next most prominent color, and its tone, and most importantly the relationship to the first color. And so on. Until I had filled the canvas, often with colors that seemed totally wrong but had been ascertained by their relationship to other colors.

There magically appeared on my canvas the model in all her three-dimensional glory. After some fine-tuning, it became a great little painting which I still keep as a memento to Euan Uglow in my studio. In twenty minutes, he had shown me a fundamental building block, which I was able to adapt to my own painting needs, for which I am eternally grateful.