“The art of painting, for those who know how to use their eyes, resides in an apple on the corner of a table. What could be more stupid than painting an apple! And yet to make of such a simple fact something that will be elevated to beauty, painting will have to engage all of its means; it will have to be solid, flexible, and rich in substance, suggestive too, so suggestive that it will have the luxury, the grandeur of revealing man’s presence in the apple — the apple surrounded with an atmosphere of thought.”

From "To Myself," Odilon Redon 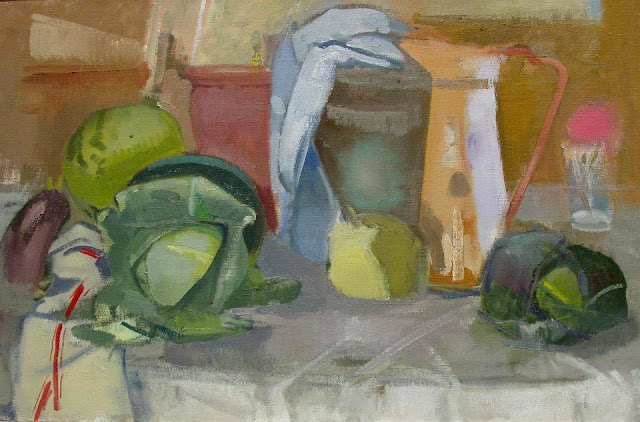 If we substitute cabbage, gourd or pumpkin for apple, this quote of Odilon Redon perfectly suits and describes the achievement of the paintings of Ruth Miller on view (October 12-November 12, 2011) at Lohin Geduld Gallery. Few painters of our time could renew the sentiment of these words and convince us of their continual relevance. Miller is an artist who clearly knows how to use her eyes. Her vision has been honed by over sixty years of working from nature, studying the work of the past, and in communion with the best artists of the New York School. She is an exceptional draftsperson, as demonstrated by the drawings in the exhibition. 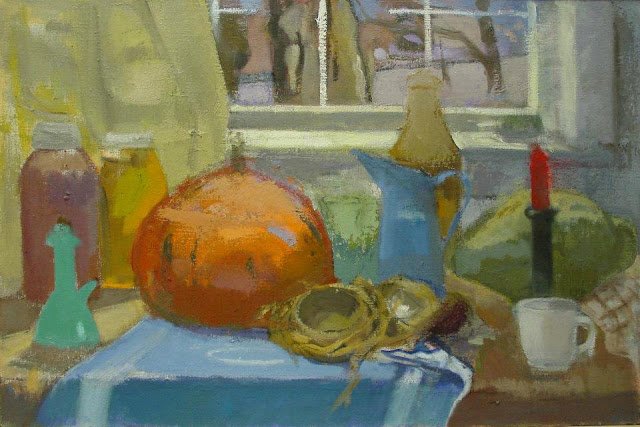 The paintings display a mastery of color as well, and the ability to combine and structure pictures through both drawing and color. The key words in Redon’s quote are elevate and suggestive. The elevation in Miller’s painting is achieved through this structuring. She is a constructor, a term used by Cezanne to describe Michelangelo. She builds with pieces of paint that are responses to her subject and to each other. Color intervals are created which form both solidity and flexibility. The solidity is made by careful steps of tone, and a sure knowledge of how, when, and to what degree to shift value, hue and chroma.

A mason jar on a windowsill is made by three tones, perfectly pitched, yellow to orange ochre, which magically conveys both the substance and translucency of its contents (the tones are nearly identical to those used by Turner in the center his Slave Ship, which also create a liquid, luminous transparency). Grandeur is given to both eggplant and pepper through the steps of broken color that lead to a grace note of high chromatic intensity. The flexibility comes through the same means. Patches of paint allow color to detach from objects and form relations and rapports (Cezanne’s term) with objects and spaces throughout the picture. These relations originate as internal, but soon engender external or metaphorical readings. Herein lies the suggestiveness of these works. The intervals of color create passages, spaces both small and large that allow us to penetrate the material envelope of the objects. We are presented with the great orb of a cabbage, whose penetration releases constellations of color and light and creates its own mysterious solar system. 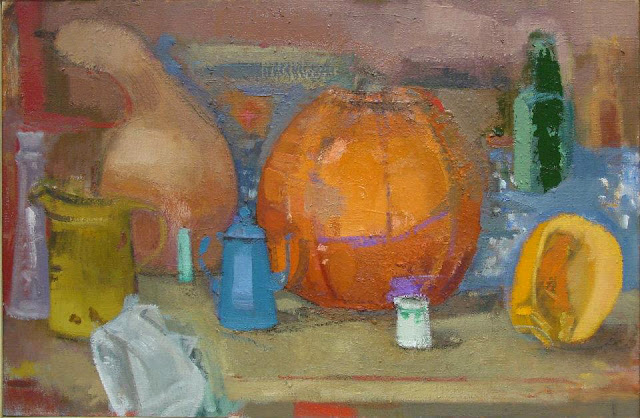 Likewise, a pumpkin is Jupiter in majesty, both the largest of planets and the king of the Roman gods. Surrounding it are the moons or minions, straining against the powerful gravitational force, the gourds pulls to the right, the half cantaloupe torques to the left, and suddenly the still life is not so still. 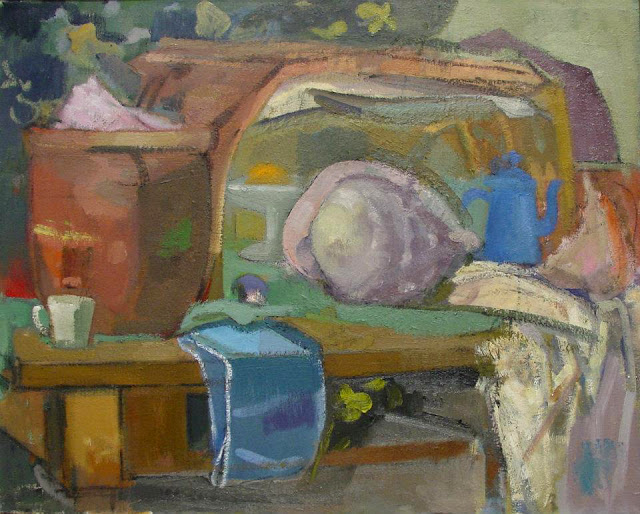 The tabletop is an arena, and Miller's connections to her counterparts of the New York school become apparent (note the vigorous charcoal drawing in the paint, as we see in de Kooning) as force and counterforce, tension and release give a precarious counterpoint to the seeming stability of the arrangement. 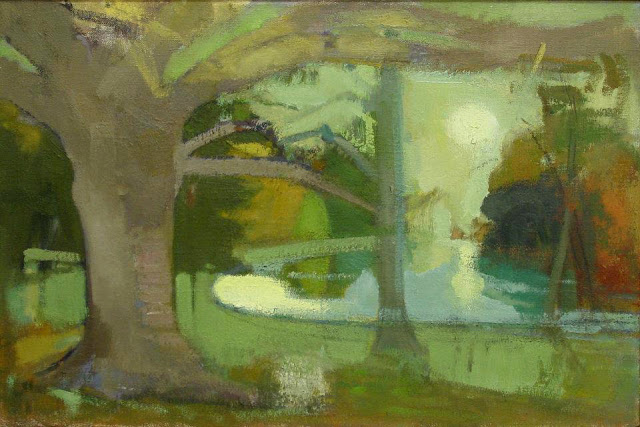 Considering both Pissarro and Redon is an informative way to see the trajectory of Miller’s career. Beginning with a kind of positivist belief in the power of observation and thoughtful ordering of vision, and moving, forgetting nothing of all the powerful lessons learned along the way, to the more suggestive and spiritual world of symbolism. This is the great achievement; we have the cabbage, and we have the cosmos as well. This is indeed is a poetic elevation and there is no question of an atmosphere of thought, deep thought, and also great feeling.