Painting what you see from a single viewpoint 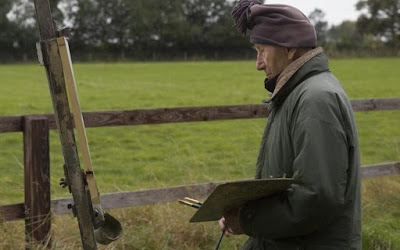 If you like what you see then it seems natural to try and describe the thing you like. Painting is an expedient way of doing this.

But why from a single viewpoint? When I notice something I stop to look at it. It has always seemed to me that my way of looking corresponds to a series of single views, and I do not think they are views seen in the round- my visual experience does not correspond to the experience of free standing sculpture, when there is more round the other side than I expected. I believe I see in views of high relief, for instance the angle between the pavement and the houses is opened out more than 90°.

Also because it is the particular relationships from a single view that are interesting. It is usually from just somewhere that I am struck by what I see and nowhere else will do or be the same. At once my position becomes significant, and the longer I stay there the more important my position becomes. The subject holds me fast by radiant lines to my eye like guy ropes to a tent pole.

One more reason is that it is the only way I have found of making a representation of what I can see and so being able to catch some indisputable facts that do not simply depend on my opinions.

It is not easy to see. The partiality of vision is well known. The selection of what is useful to see for everyday life varies with each person. Some people hardly look at all. They use a code of recognition similar to the abbreviations of recognition used by the army- ‘all trees are fir trees or bushy topped’. Everyone has their sight conditioned by every experience, not by any means just visual experience. We are all prejudiced and very conservative in what we recognize from what we see. It would anyway be impossible to get through everyday life if we looked at everything. Few people are interested in looking at the actual appearance of things and few painters are interested in the problem of painting what they see in front of them.

Painters look at pictures, their own, fine art, coarse art, photographs, advertisements, everything, so what they choose to see is not only conditioned by their everyday rationalization, but includes their own aesthetic preference; it is likely that they only choose to paint what is paintable and what echoes their experience of paintings.

But if it is not easy to see it is certainly more difficult to translate what you see into two dimensions even from a single viewpoint. By this I do not mean a fixed stare, but using the amount of scansion necessary to view the subject.

The picture starts off uniquely. Each seems brand new and different from any other and the painter has high hopes and an arrogant assurance of success. The paint looks beautiful on the clean canvas and the subject looks innocent. One hopes to ride in like a surf bather on a wave of enthusiasm, but the doubts come, are ignored, but persist. The subject changes, wriggles clear and is inviolate and the canvas looks like paint. The picture comes to a stop, the subject still looks beautiful, perhaps in a different way, and the canvas looks like yet another of one’s pictures- it is a moment of despair, when one understands the absolute difference between the canvas, the horrible canvas and the beautiful thing one sees. One has lost, so one casts about for anything, anything that will establish a connection between the canvas and the thing one looks at.

I think it is possible to establish some sort of elementary comparative similarity between the canvas and the appearance of the subject. Looking at a window it may be possible to tell whether it appears higher than it is long and it is possible to mark off on the canvas two distances with this comparative similarity. So one builds up a system of empirical proportions- the distances and intervals alike and unlike, the same, greater or less. Each time one finds a new ‘position’ and its corresponding ratio with what has gone before, so one more comparative fact has been gathered from the subject and each is precious, particularly the ones of absolute certainty- slowly the picture accumulates information, the like distances and intervals make a rhythm which multiplies across the canvas. The first distances become significant units and their length(in fact the first distance) is the measure of every other position. The subject is still as completely beautiful, the canvas acts like a ledger; the marks of interval describe what has been found out. They are selective, but in so far as the answers are correct they are outside the influence of opinion.

A number of positions can be described by a line. The object can be seen in terms of a collection reciprocal lengths. The lengths smaller or longer depending on the proportions of the object, the distance away, and the angle they make to the eye. (It is not easy to see the receding railway track as a near-vertical line.) The first line on the canvas is qualified by the second and so is understood to be longer, shorter or the same, and the lines of apparently the same length echo each other. The lines have direction; they point in the same or different ways implying movement that is halted or reinforced; they lie on the canvas and their tilt and balance make an equilibrium with the rectangle. They may join end to end to become an articulated line whose length is made from the sum of the parts, they grow like a shoot into twigs and all the articulations are like branches of one tree. Seen simultaneously the articulated line becomes a character. The appearance of the object is translated into these characters. The characters whose shapes depend on the viewpoint(because they do not exist in the actual object) can, if made without mistake, lead to an unprejudiced account. 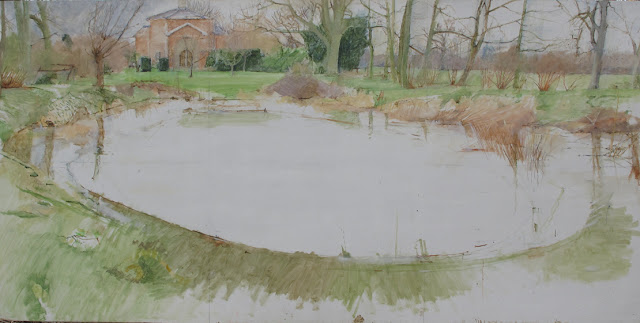 If the articulated line joins on itself it cuts off an area of the canvas. The area is described by the lines like a field surrounded by hedges; the limits of a field may be described by hedges, but the field is not the sum of the hedges and the shape is not the sum of the lines. These shapes particular to your point of view have to be identified as two-dimensional patterns so that they may be made on your canvas. A rectangular tabletop cornerwise on becomes a diamond shape. When things are placed on the table the top is obscured and new shapes are made. If the objects overlap they lose their familiar outline: the side of a matchbox becomes a yellow flag, piece of table a cooling tower, the arrises of the inkwell cranes and signal arms, the half-seen dish a moon.

The shapes are juxtaposed into an irregular mosaic. The adjacent shapes condition each other by their common boundaries until they lock together and form a third shape that encloses them both and is more than the sum of the two. The shapes expand, each continually refined to accommodate the last, and the last by a series of compound comparisons influences the appearance of the first. The shapes expand until they add up to a description of the diamond-shaped tabletop. Some shapes are more difficult to see than others- if the real-life shape is in elevation then it is easier to translate it than if it is seen obliquely, like the tabletop or a field. It is the oblique shape, the surface running away from the canvas that is the difficulty. It is incompatible with the surface of the canvas. In the translation one’s mind has to force the far boundaries forward and the near surfaces back so that they can be comprehended in terms of their optical appearance. Malevich’s picture of a single yellow plane receding into infinity seems to me a marvelous illustration of the crisis of appearance. I believe everyone is aware of this when they stand looking over the sea. The impossibility of mentally tipping into elevation what we know to be a huge flat area stimulates our appreciation of what a great distance we are looking over. We are never more aware of how far we can see away from us than in the absolutely flat parts of East Anglia; mountains which are landscapes in elevation, do not so particularly stimulate our sense of distance. The single viewpoint painter has to make the difficult imaginative effort to see the horizon and foreground in the same plane, the plane the shapes occupy on the canvas.

This particular representation of the two-dimensional appearance constitutes and appreciation of the three-dimensional form; far from projecting himself into the three dimensions of the object, which is a way of reducing the object to what we expect to find, this effort to see flat the three-dimensional object provokes the sense of form by describing the difference found between the real-life object and the canvas. These ways of coming to terms with the thing in front of us depend on relative proportions. (With certain reservations these proportions can be gauged with the help of a brush or pencil held at arms length and at right angles to the line of sight.)  The time is spent exactly


co-ordinating the proportionate lengths and intervals and directions. The marks are made again and again until the pattern rings true, or as true as the painter can make it, the actual look of the picture is determined by when the painter leaves off, and often he does so for quite circumstantial reasons; the leaves fall off the tree, the model cannot come any more. But the amount of contact that he manages to correlate mainly depends on his own capacity; obviously great painters can manage more than less great. The picture at first seems to go swiftly, but as more information is gathered and brought to bear on what has gone before the pace slackens off like a graph that first rises steeply, but as time passes eases off until the curve flattens out and hardly advances against the time spent. The changes get smaller but are as difficult to make. Like the tide coming in, the waves go back and forth and it is often necessary to spoil what is done before the painter can get further. Sometimes the wave goes out and does not come back, but in any case the picture will never be finished. The knowledge and selection from the appearance of the subject always changes and there is no absolute solution. The picture does not stand for a reflection of the object but for a prejudiced account- for the visible compound of experiences and the efforts to translate them in front of the object.