*with an inordinate amount of quotations from other artists and writers. 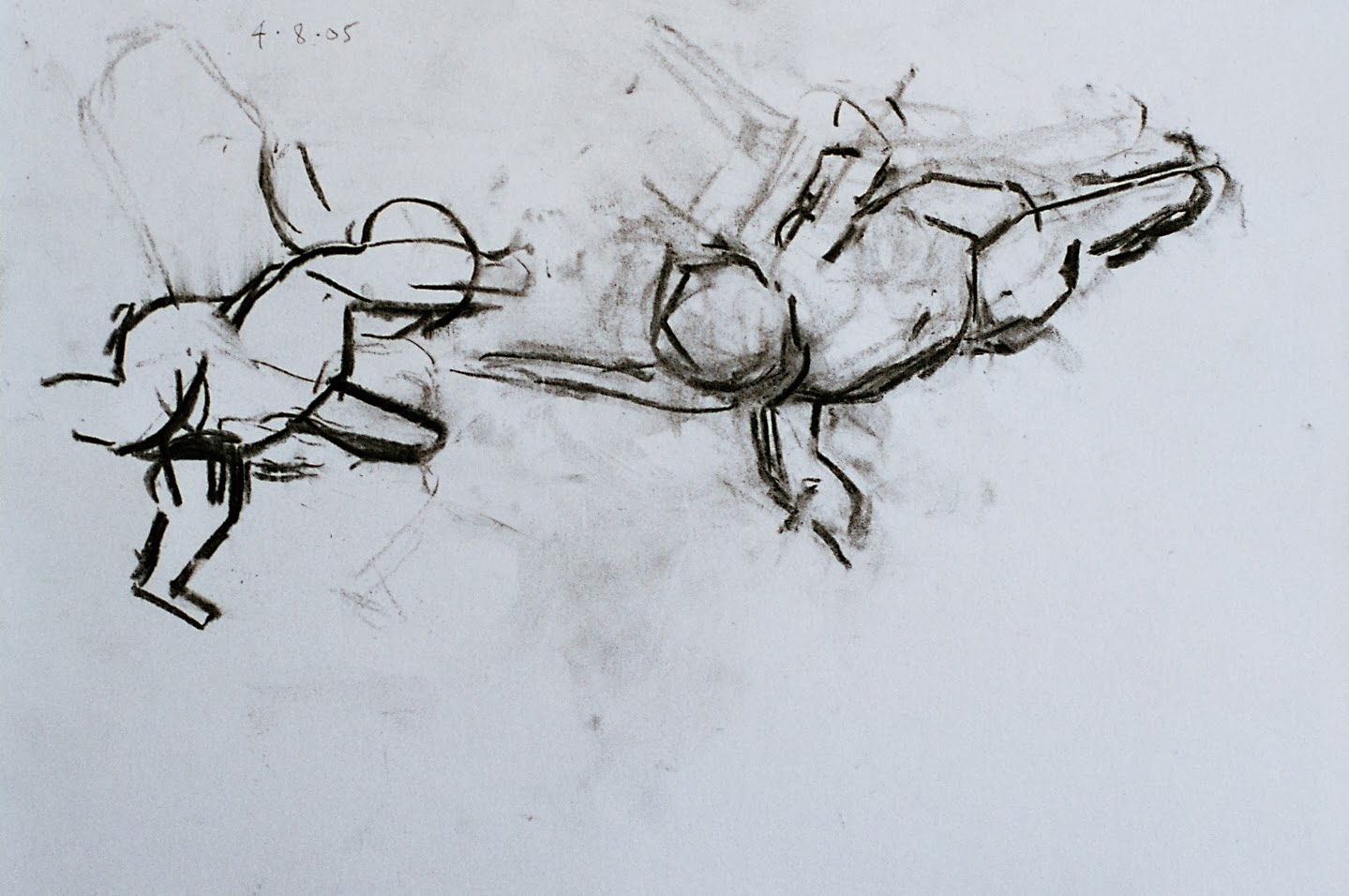 Other writers (usually painters themselves) have written far more perceptively and intelligently than I ever could — I would urge anyone interested in drawing to read Patrick Heron’s essay on Constable’s drawings (1). Sargy Mann has written so well on Bonnard’s drawings (2) that I imagine anyone reading his commentaries on that artist comes away with an enriched experience. Both these artists write so well about the nature of drawing itself that it would be futile for me to try and do anything other than point you in the general direction of their writings (see list at end of this essay). Sargy Mann in particular explains very clearly the difference between illusionistic drawings (which only tell us what we already know) and “real” drawing.

Drawing and painting are very closely combined. This might seem a surprisingly obvious statement: after all, the act of painting could hypothetically be broken down into drawing, colour and tone – yet some serious observational painters nowadays hardly draw at all. For me, regular drawing (with a pencil) is necessary for me to “get my eye in.” In order to perceive colour-shapes clearly, I need to draw first.

The recent Daumier exhibition in London was a perfect manifestation of his contemporary Delacroix’ opinion that “Cold exactitude is not truth.”

Line drawing is not putting a silhouette around an object (the reason those who project a photograph on their canvas and fill it in produce dead images).  A good drawing like a good painting consists of “shape(s) made from a sense of mass, not a sense of shape.” (Frank Auerbach)

How do you counter a student’s idea of style?

PG: By drawing his attention to Leonardo’s rain of shading, Seurat’s spots, Gilman’s language of ticks and dots. They all go back to the fundamentals, the movement of the form in space, the planes. The planes of the face are as wonderfully shown in Giacometti’s drawing of a skull as in Holbein’s famous drawing of a head sheered in facets.

What are the most common difficulties in teaching drawing?

PG: Doing something too different from what the student is trying for: he may be after the wit of Daumier or the Mexican grandeur of (Henry) Moore, but it is not likely to be both, so it is best to show how the figure should stand on its feet, the head should be in the right place above the hips, rather than fall into his way of seeing or depart too much from it.  (3)

Some drawings
I want to try to describe some of the factors or qualities that really good drawings have in common, using images by great painters as examples.

All the artists had/have in common a desire to see things afresh and not get tied down to visual cliché, and yet, all these artists copied others artists, had a profound understanding of, you could say a dialogue with, the art of the past.

For example, three of the most original and inventive artists of the last 150 years, Cezanne, Picasso and Giacometti, all spent a great deal of time copying other artists; not just when they were students but right up to end of their lives. 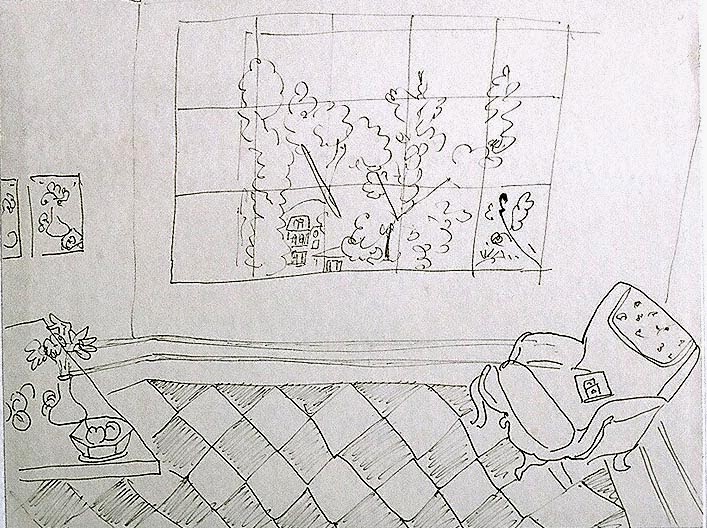 I saw this Matisse drawing at a private gallery abut 15 years ago. A friend (not a painter) commented that it was willfully naïve and that Matisse was affecting a “style.” This upset me and it forced me try and articulate why I didn’t agree with him. The layman would indeed find the marks clumsy, childish even. Perhaps the best way to look at this drawing it to try and take it all in at once, which is how I imagine Matisse made the drawing in the first place — I mean he tried to relate all the different elements to each other, rather than describe them one by one. For me this is a great drawing, it gives me an experience of the room far more real than a photograph or illustration ever could. And the tension between this experience of reality and the flat pattern of the lines makes it a living thing one never tires of. 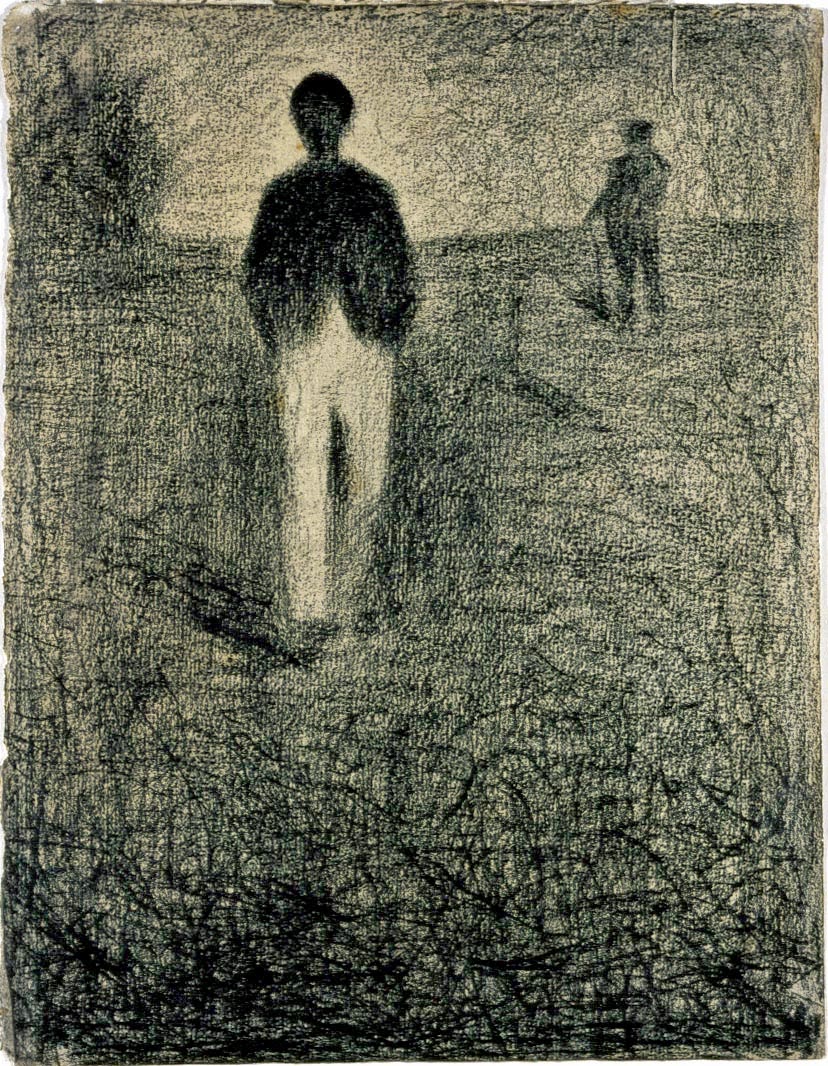 There is something very mysterious in the mark-making of Seurat’s drawing. What at first looks like simple shading frequently turns out on closer inspection to be a matrix of fine interlinking lines – lines that bear no obvious relation to the objects depicted.

Seurat used a heavy rag paper called Michallet, and the way the tufts “catch” the Conte crayon only goes some way to explaining the incredible depth of tone and subtlety of these drawings.
Notice how important the white trousers are to the composition of the drawing — in fact seeing the white shape against the dark ground may have even been the reason the drawing was made.
Also very subtle the way the movement is depicted. The head slightly off centre, the elbows not quite level, the left leg (right as we look at it) fading away from the knee downwards — leaving us in no doubt that he is walking towards us, yet still making a stable form that doesn’t upset the balance of the drawing.

Courbet  Portrait of the artist’s sister 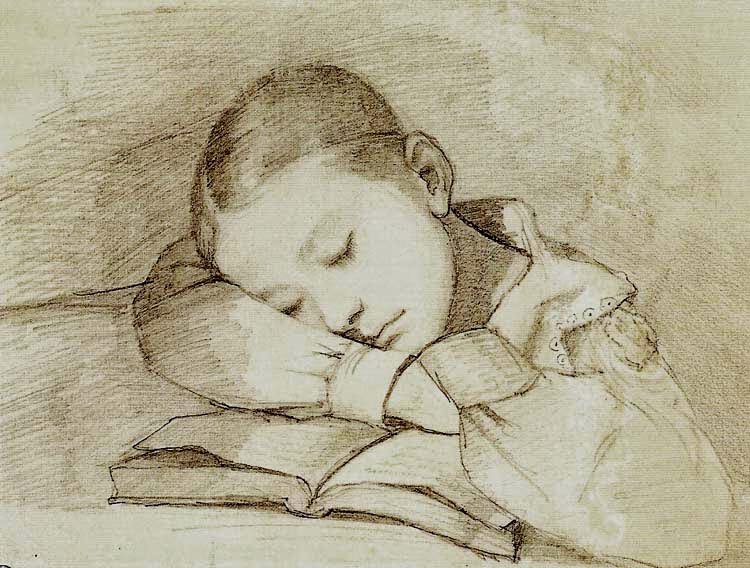 Touching, sensitive drawing from an artist often regarded more for his power. 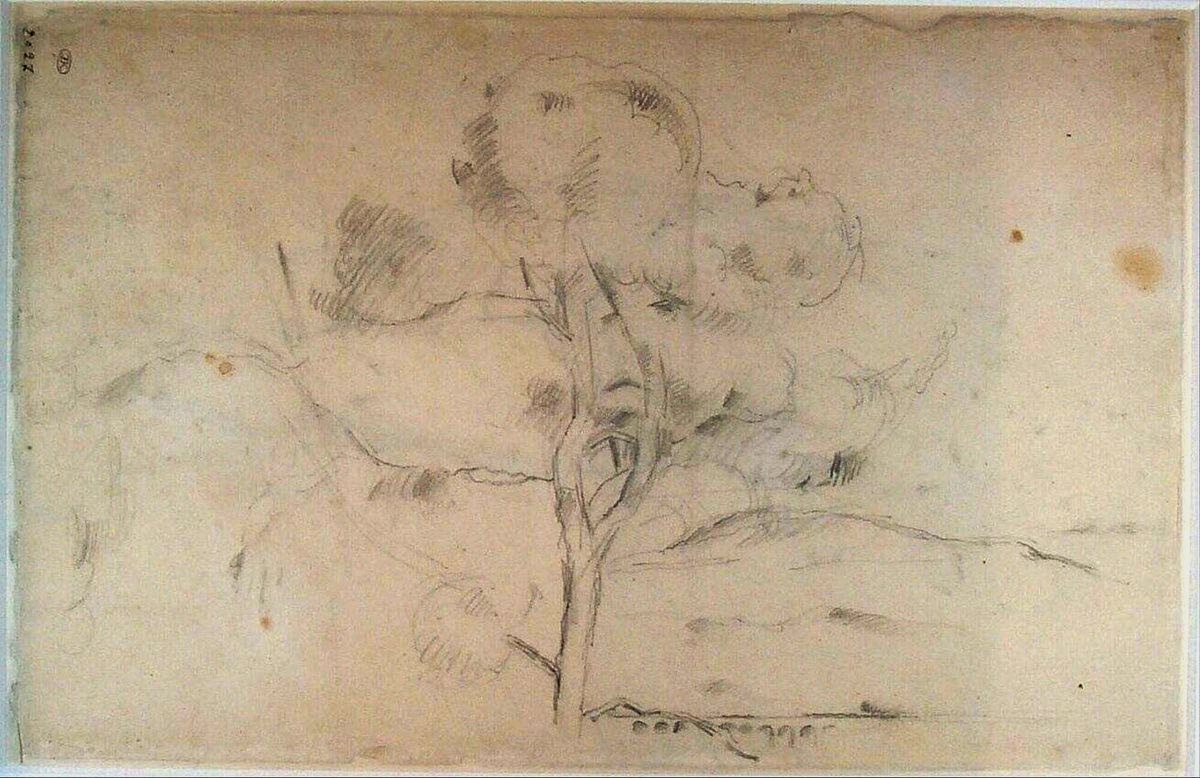 For me Cezanne is a very great draughtsman. His best drawings combine enormous volume with a total respect for the flatness of the picture plane. Each mark on this drawing seems to energise the flat sheet of paper on which they are drawn.

Cezanne Studies of Three Figures, Including a Self-portrait, c. 1883 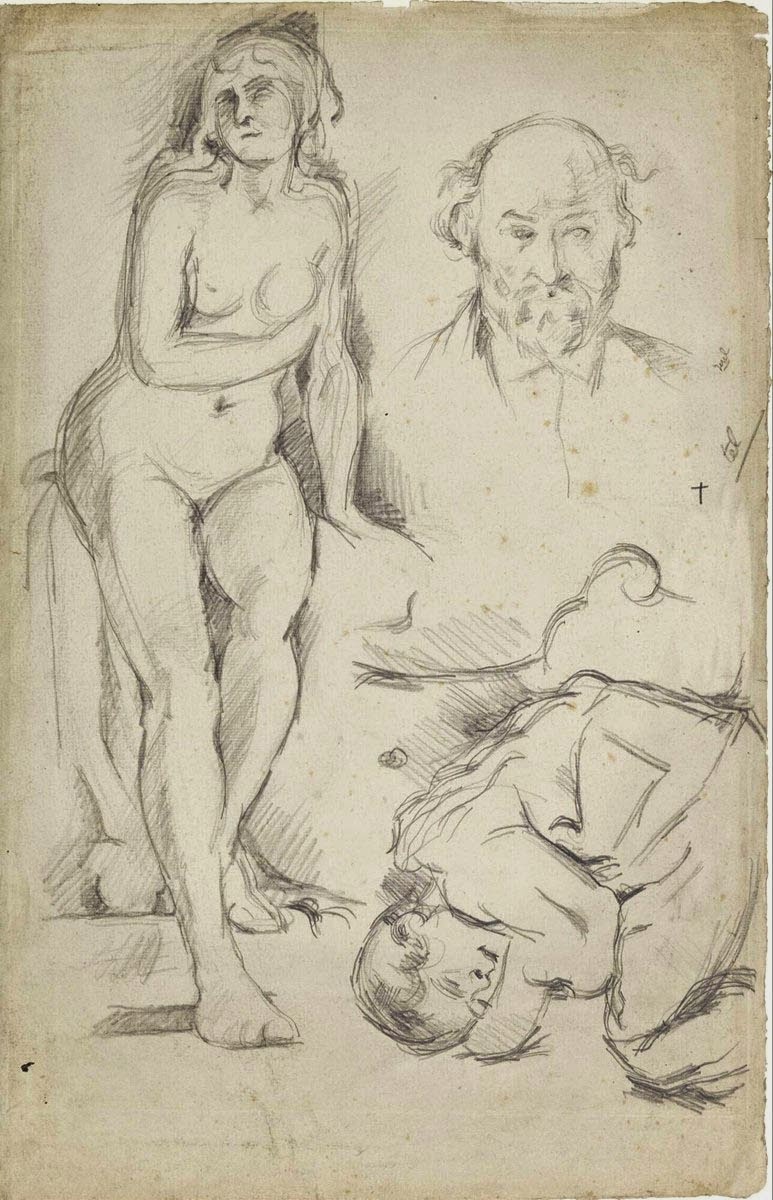 Look at the figure on the lower right of this drawing- Cezanne’s son asleep in a chair. Equal emphasis given to all the forms- the way the back of his shirt “rhymes” with the arm of the chair. “The whole thing (said Cezanne) is to put in as much rapport as possible”. And Cezanne famously told his dealer Vollard (whose portrait he was painting —  Vollard had pointed out two small patches of bare canvas on the painting and asked whether Cezanne could fill them in): “If the copy I’m making at the Louvre turns out well, perhaps I will be able to find the exact tone to cover up those spots.” The copy that Cezanne refers to would be a drawing, not a painting. Which brings me back to my original point- that painters should draw constantly, in order to see, and therefore to paint.